The Rules of Ownership. 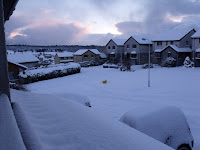 I am snowed in today. Overnight we had another massive fall of snow. As I look out the window it is obvious that putting on running shoes would be an utter waste of time. Walking would be possible but it would be silly to try anything of any distance. So I am trying another watercolour, difficult because I am not alone in the house, I am not the only one snowed in.

Yesterday I walked for almost three hours, completing a walk that would normally have taken just over two hours. The snow was deep and the path I was walking had many obstacles caused by branches broken with the weight of the snow.

In the village the order of the day was snow clearing. Now I remember when I was younger it was the pavements that people cleared, throwing the snow to the edge of the road, leaving the central area for any cars that might be moving. Now the main aim of everybody is to get the car moving and the road clear. Snow was being piled high on pavements forcing anybody at all trying to walk to venture onto the road and take the risk of being hit by a skidding car. I even noticed some people throwing snow onto the pavements of older people who have no car, and may well want to get out for bread or milk. Then maybe I am being cynical but I suspect nobody has noticed that they might need out. Or maybe once they get the car moving they will go get the bread and milk. Now why do I not believe this?

I just could not help feeling that somewhere we have lost the whole meaning and purpose of life. I keep getting told that I am wrong and that it is just my age. Maybe they are correct, but I have a real deep nagging thought that it is more than that. I suspect that the rules of childhood ownership now carry on well into later years, if ever to be let go of at all. What do I mean?

If I can take it from you, it's mine.

If I had it a little while ago, It's mine.

If it's mine, it must never appear to be yours in any way.

If I am doing or building something, all the pieces are mine.

If you are playing with something and you put it down, it automatically becomes mine.

If it's broken, it's yours.

Ah well I better get back to this watercolour I am trying to do. I hope nobody has seen my paints and think they belong to them.

Pictures above are of my walk yesterday and the view from my study window this morning.


Have a great day.

I have another blog at Cold Mornings.
Posted by Ralph at 11:18