You Cannot Just Blame The World. 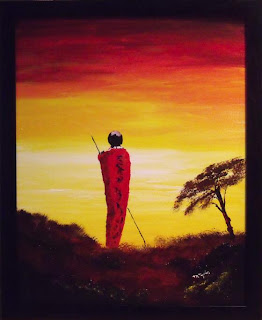 The Warrior Watches
I really hope that I did not give the impression that  I was being picked on because that was not my intention. I am sure that every artist I have ever talked to has had the same experience of people pointing out the little errors rather than concentrating on the good aspects.
I was always aware that if I was to be a good teacher then I would be if I always aimed to make sure that every student who ever left my desk left feeling good about themselves and the work that they produced. I also hoped that in that process they learned what could be sorted and some of the things that they needed to look at.
I learned this from my mother and father. No matter what I ever achieved my mother always asked why I had not done better.  I remember getting my annual report card which stated that I was the second top pupil in the class of 32, I was so proud. On taking the report card home my mother asked who was top and why had I not beaten her. My father on the other hand was always ready with the praise, he was the one who said, “well done.”
This reminded me of the story of the king who went on a journey round his realm. After weeks of walking  he returned to his palace. When asked by his counsellor about his journey all he could talk about was his painful feet caused by the long journey and the terrible roads of his kingdom.
He gathered together his court and ordered that all the roads of the kingdom be covered in leather, this he said would make them easier to walk and travel on. The court began immediately to work out what the cost of this would be and how many cows would have to be slaughtered to make it possible.
It was at this stage that the wise man came to the king and suggested that rather than that would it not be better to cut two pieces of leather and put them on his feet.  A wise thought and a much simpler task and easily achievable.
If we are going to change the world the best place to begin is with ourselves.
This blog is linked to my other.The Warrior Watches
Posted by Ralph at 09:14