You Can Sometimes Try To Hard. 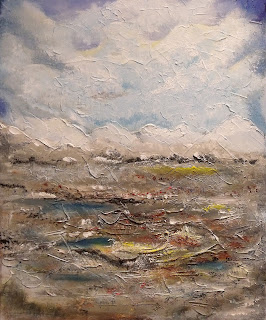 A Scottish Landscape
We Scots have a long history blighted by what we call our Presbyterian streak.  It is the wonderful ability of being able to snatch defeat from the jaws of victory and always putting ourselves down. We are never good enough. As a nation we feel unable to stand on our own two feet and for some reason feel sure that without the help of the rest of the UK we would flounder. This is  spite of our long and wonderful history of invention and making strides forward possible for humanity possible in so many ways.
On the level of personal human beings we have a tendency to act the same way. I can remember the many times when I was proud of some achievement for it to be pointed out to me that I could have done even better.  As a parent I once or twice found myself almost falling into the same trap with my children, fortunately not so often that it has effected them.
I am very aware of these traits in my own makeup. I never felt that I was  a great preacher, and was always aware of the few pews in the church that were empty rather than the 900 that were filled. I never felt I was as good a teacher as I might have been in spite of the exam results of my students saying otherwise. I have never painted a picture that I am happy with in spite of so many sales.
There is a wonderful tale Lao Tzu and some of his followers. One they travelling together along a road through what used to be a large forest. The woodcutters had cut down all the trees except for one large tree which they were all sitting under having lunch.
Lao Tzu asked his disciples to go and enquire if this last tree was also to be cut down, and if not why not. When they asked the cutters they were told that it would not be because it was totally useless. They were told it was no use for furniture because it branches were not straight enough. It was no use for firewood because it contained to many knots and twists and so would cause more smoke than heat.  That is why it has been left standing.
When the disciples returned and reported back to Lao Tzu he smiled and said, “Be like this tree. If you are useful you will be cut down and become somebody’s furniture. If you are beautiful you will be sold as a commodity.  But if like this tree your are useless you can be what you are and look at all those who are enjoying sitting under its shade.”
It is better to be as good as you can be rather than have to be continually telling yourself how useless you are.
This blog is linked to my other where I discuss the artwork used here. A Scottish Landscape
Posted by Ralph at 12:12